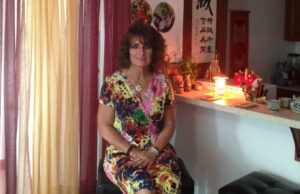 After 10 years of homelessness, Dianna (age 50) was overjoyed to find housing at the HFL Sequoia Apartments. “It was so exhausting being homeless,” she said, “I wanted to give up on life.”

Dianna’s mental disorder made it hard for her to hold a job for long. Over time, rents increased that welfare wouldn’t cover, and her self-esteem reached an alltime low when she found herself sliding into homelessness. She said, “I wanted to be independent, and was embarrassed to live in my car.” She became one of the 58,000 people who are homeless each night in Los Angeles County.

“I also looked for others to take me in and care for me.” Many of her relationships weren’t healthy, however, and after being physically and emotionally abused, she cycled into homelessness over and over. She said, “I was so sad because I had children and grandchildren, and wanted a place so they could visit me, but wasn’t mentally stable and couldn’t find a job.” She later sought treatment for her mental disorder at Didi Hirsch Mental Health Center, and said a caring caseworker with a big heart helped her apply for and secure affordable housing.

Supportive Services Coordinators (SSC) of Homes for Life Foundation called Dianna for an interview, and she was among the first to be approved to move into the HFL Sequoia Apartments in 2014. She calls this new construction apartment building “a beautiful mansion on the corner, where everyone cares about everyone else.” She has her own one-bedroom apartment with a kitchen and living room which she decorated in a “Chinese Palace” theme.

Diana said, “My children were so happy for me.” Her two daughters and two granddaughters now visit her in a clean, safe living environment. Not only does Dianna have a place of her own, she also has a support system at the apartments. SSC are available to assist residents by referring them to health and wellness centers, assisting them with budgeting, providing transportation to medical appointments, and to other community resources such as food banks.

“Dianna has been a model resident at the apartments since she moved here,” said Linda Zipper, SSC. “She regularly attends on-site functions and community outings, is friendly with her neighbors, and keeps her apartment immaculate.”

After securing permanent, affordable housing, specifically designed to serve persons with mental disorders, Dianna has experienced many positive changes in her life, including an improved relationship with her family, improved sense of self-esteem, and improved ability to manage symptoms of her mental disorder.

In the future, Dianna wants to be like others by finding and holding down a part-time job. She also has a short-term goal of serving as a volunteer with the elderly.

“I am so grateful to Homes for Life because of having an opportunity to live a stable life.”